Birch Hill is an exclusive development of high quality homes located on the edge of open countryside at Belt Road, one of Derry’s most sought after addresses. This quality development features a superb range of energy efficient detached and semi-detached homes set in a carefully crafted, landscaped site layout. 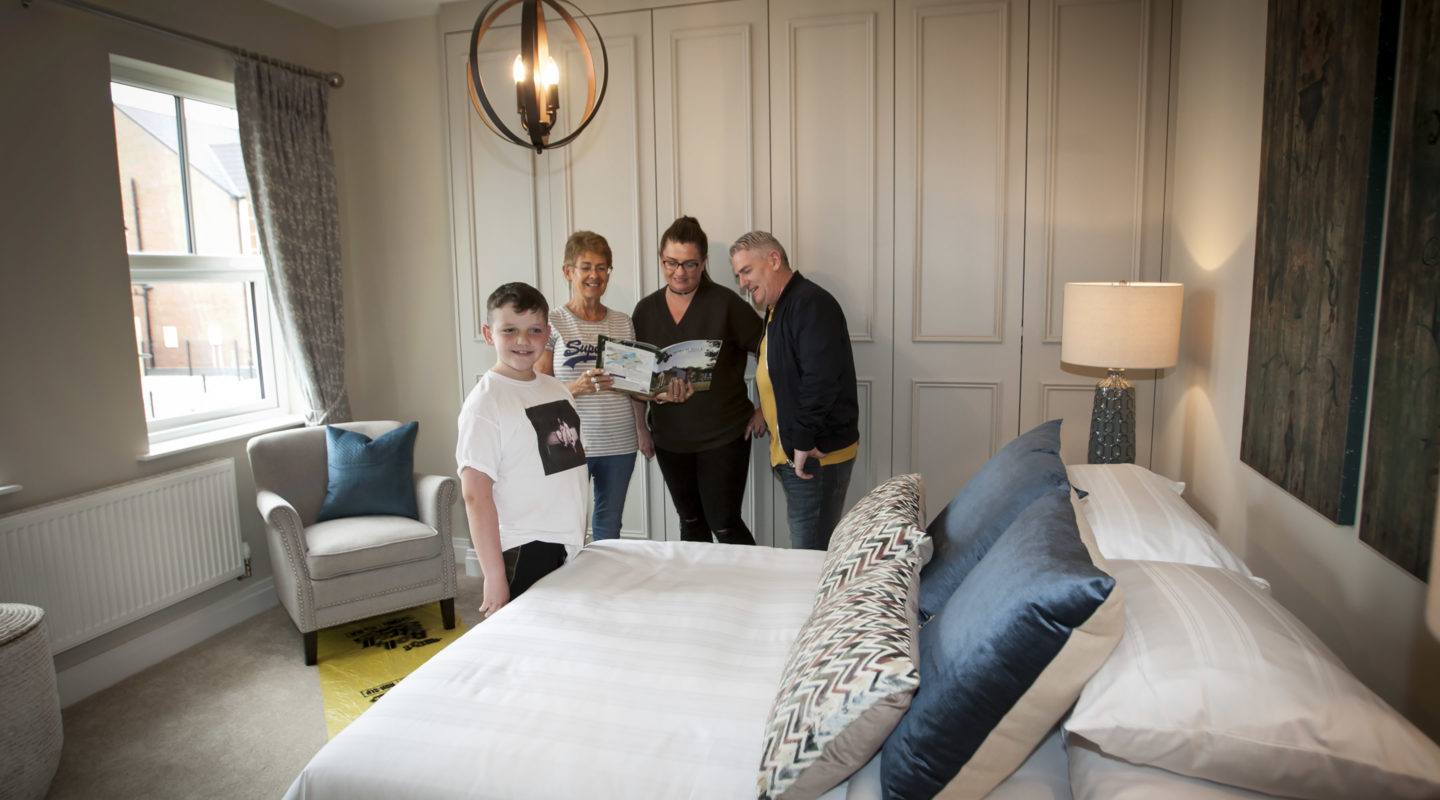 Darren Farnan, marketing manager at Braidwater, said: “We were absolutely delighted with the turnout at the launch of the new show home at Birch Hill with the quality and finish on view backed up by several bookings for the new release.

‘’It was a busy two hours for Braidwater representatives, as well as selling agent Donnybrook Estate Agents. On top of that, the Braidwater team was delighted with the hugely positive comments on the top class interior design by Poppy McGinnis.’’ 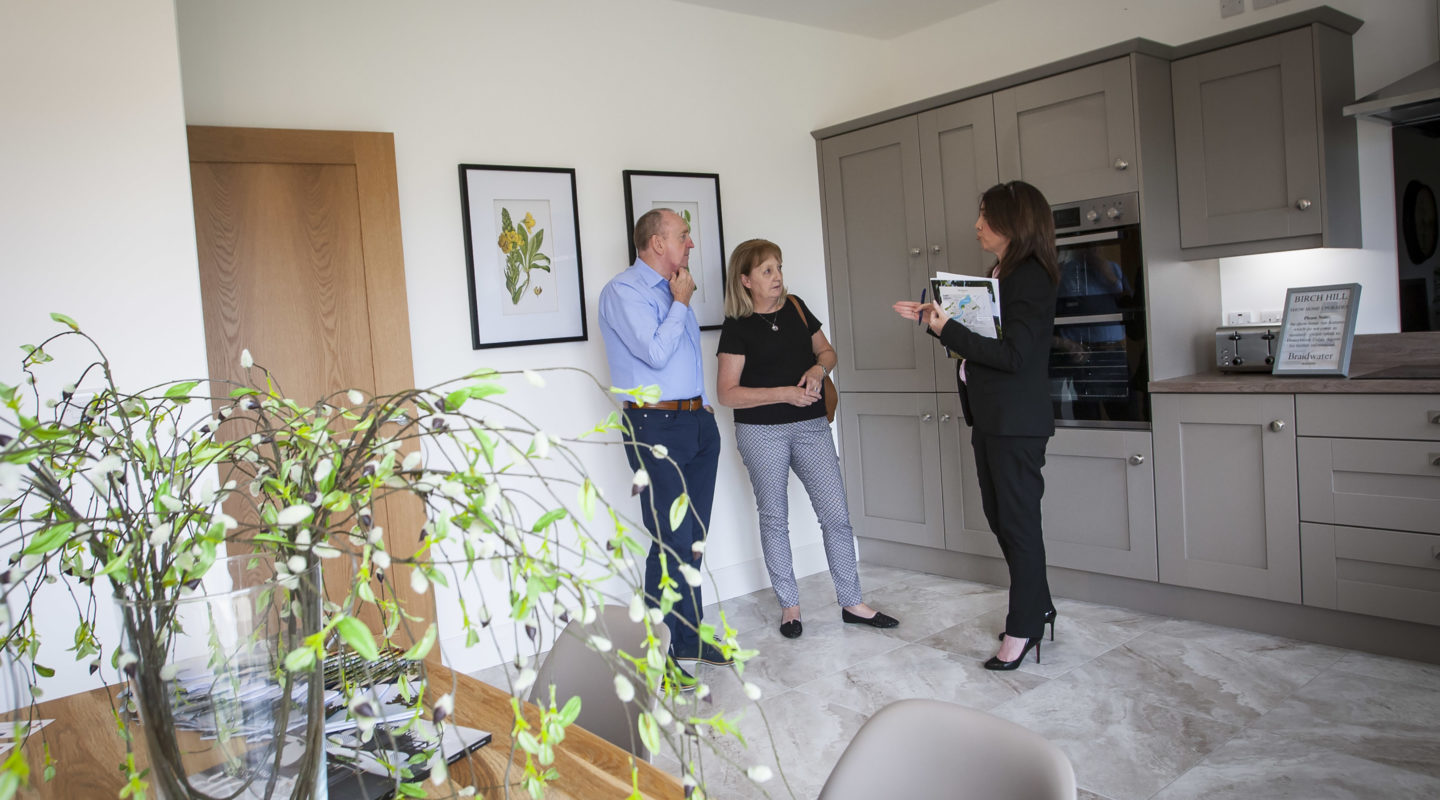 Carol and Max McLennon pictured with Ciara McCarron, Donnybrook Estate Agents at the launch of the new show home in Birch Hill on Sunday.

The now maturing Birch Hill has a beautifully planted open area which forms a centrepiece to the development, along with many fully grown trees and a purpose built children’s play area for the benefit of all the residents.

Interior designer, Poppy McGinnis from Cornerstone Partners, said: “With this show home we wanted to create a space which was inspirational but also achievable for first time buyers and young families. We have used excellent high street brands to accessorise the rooms in a way which will allow people to really picture themselves living in the Birch Hill development. 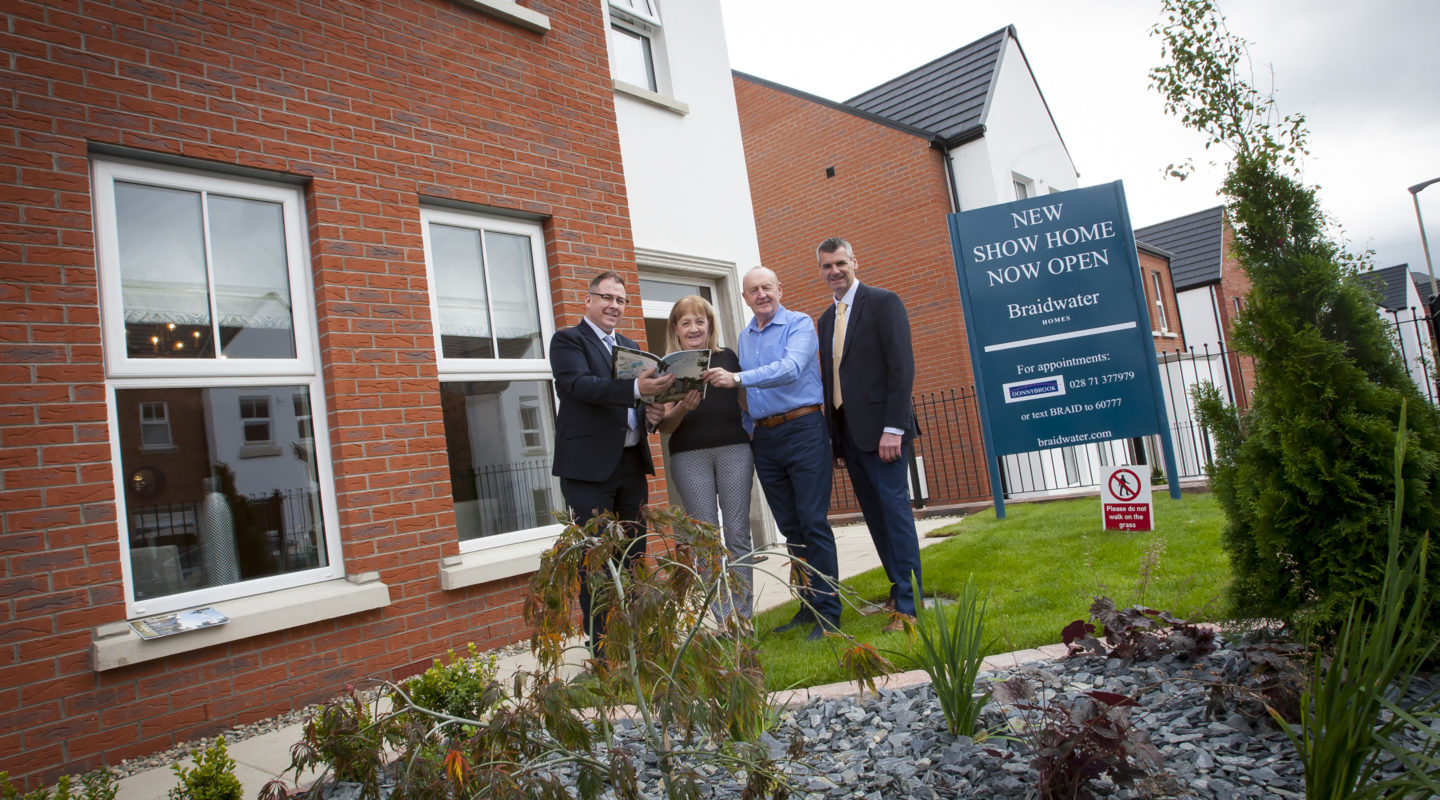 Carol and Max McLennon pictured with Stephen McCarron, Donnybrook Estate Agents and Darren Farnan, Braidwater Homes, at the launch of the new show home in Birch Hill on Sunday.

Poppy continued: “’With this new show home we’ve selected a colour theme of shaded white by Farrow & Ball, which is essentially a taupe with an ivory undertone. It is a classic warm colour that works particularly well with soft yellow, pink or olive tints that you will see elements of throughout the entire house.

‘’This is a wonderful colour to work with as a base & makes a refreshing change from the grey palette. In this instance it has worked well with the Austin silver tile & the Apollo Buttermilk carpet, which are part of the standard selection range.’’ 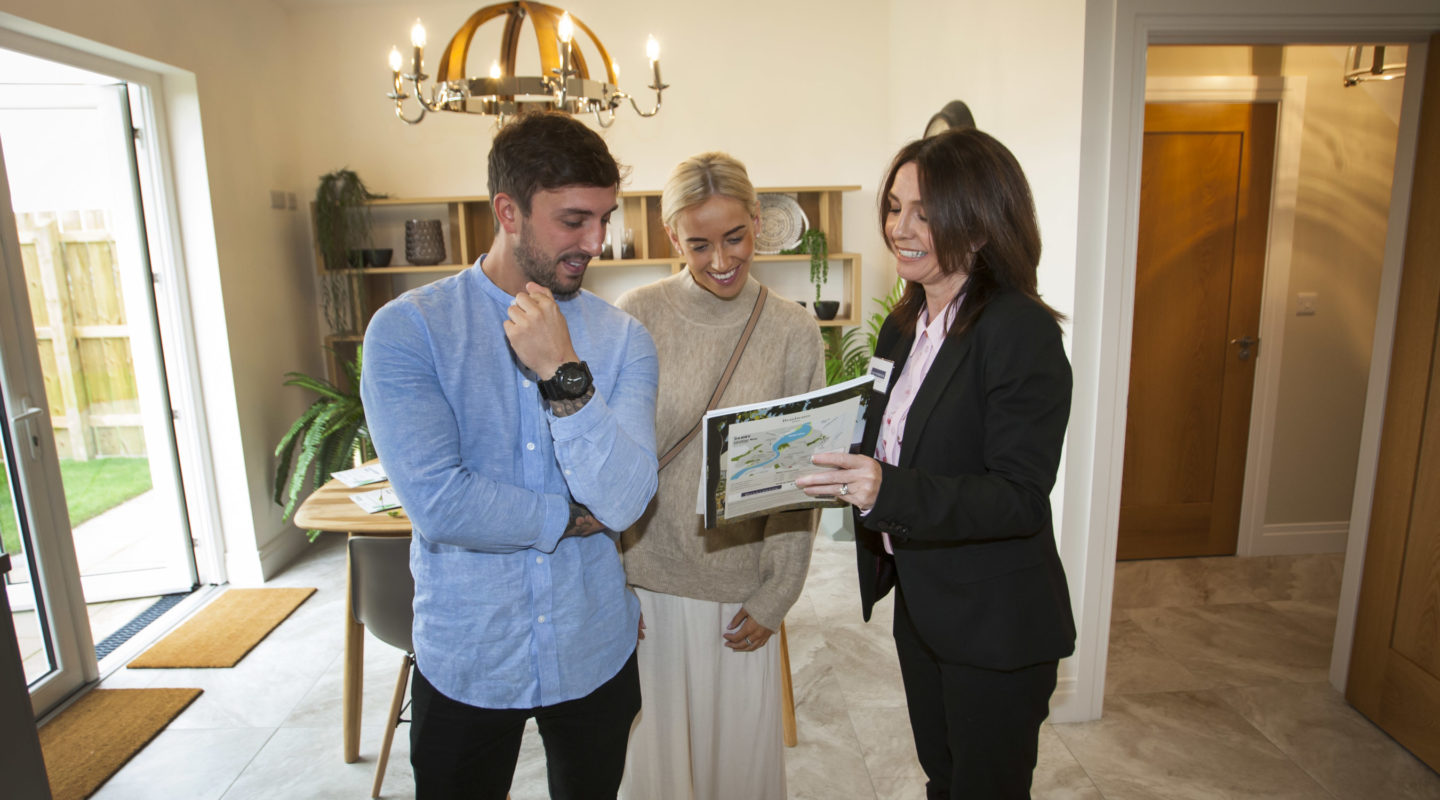 Jackson Turner and Emma Willox get some information from Ciara McCarron, Donnybrook Estate Agents, at the launch of the new show home in Braidwater’s Birch Hill Development at Belt Road on Sunday.

The two show homes at Birch Hill are open every Tuesday and Thursday from 7-8pm and Sundays from 2-4pm.

For further information on the latest availability and pricing at Birch Hill contact Donnybrook Estate Agents on 02871 343600. 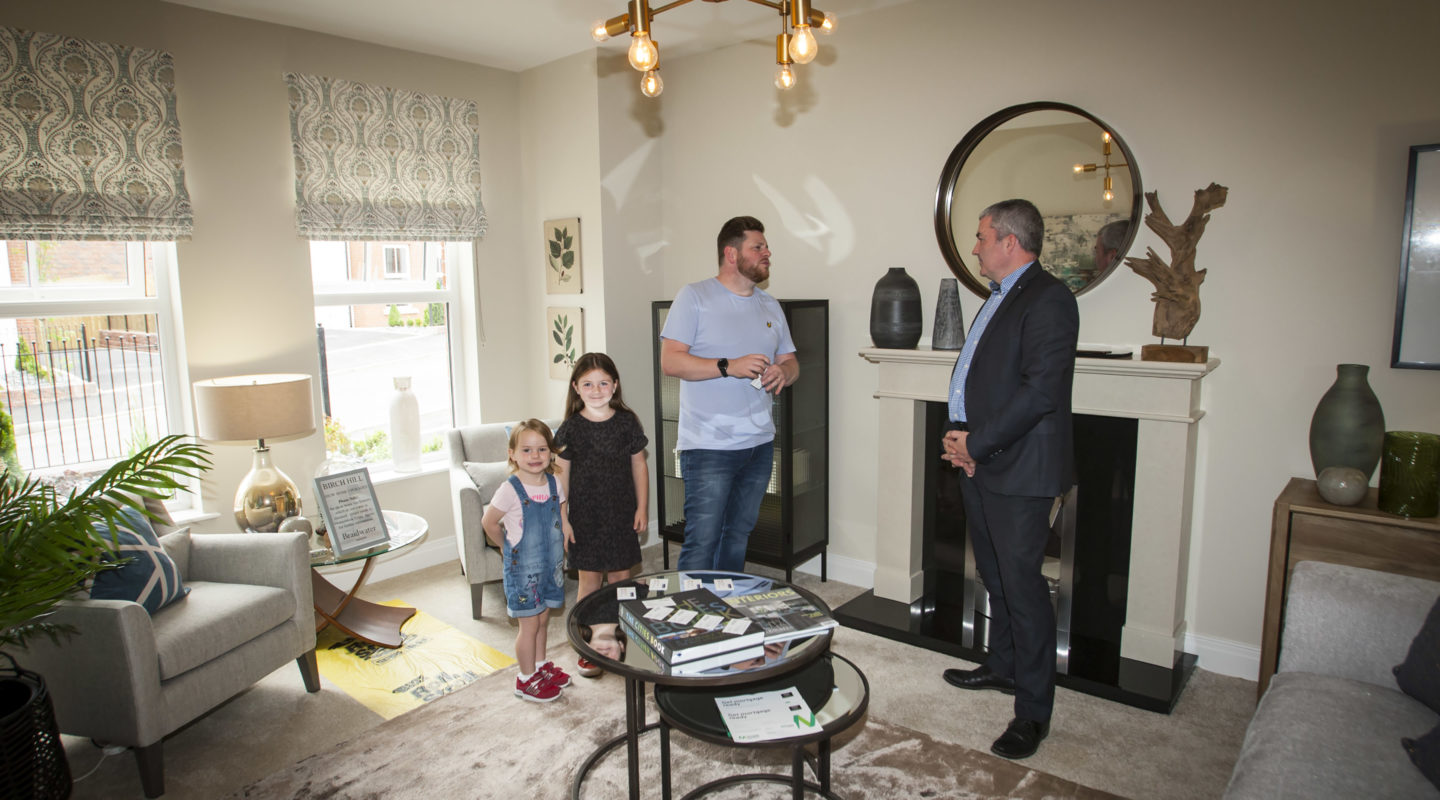